A New Tool: The RAD Calculator

To get a job done, you need the right tool. Researchers now have one that will make their job easier.

Most experiments run through the Nuclear Science User Facilities (NSUF) have the same underlying goal: quantifying changes in material properties. These changes arise from the radiation damage caused to a sample placed in a nuclear reactor.

When designing these material science experiments, NSUF researchers have to make some choices: which reactor or reactors among those available would be best to use, where to place a sample within the reactor, how long to irradiate the test material and to what radiation damage levels (measured in displacements per atom, or dpa, units) are practical. On top of that, researchers may have to select among several sites to conduct critical post-irradiation material evaluations.

The complete experimental design process is challenging, particularly for those who are not test reactor subject matter experts. Now NSUF users have a new tool, the Reactor Activation and Damage (RAD) Calculator, to help guide experimental design. The RAD Calculator can help researchers be more efficient in designing their experiments because it provides what amounts to “expertise-in-a-box.” 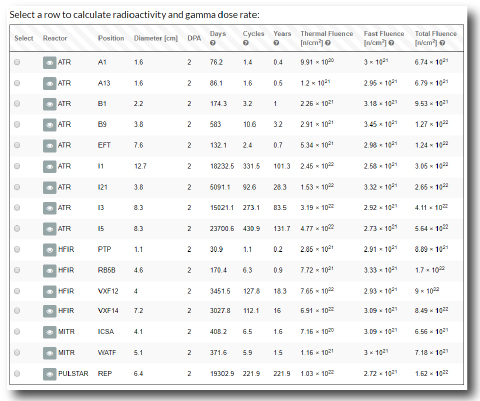 In the past, such know-how came in one of two forms. The first was back-of-the-envelope calculations. The second was an in-depth analysis done in consultation with a nuclear engineer.

Both approaches present problems. By their nature, the results of back-of-the-envelope calculations are only rough approximations. Using this method, a researcher might conclude that an experiment could only be run at heavily-in-demand NSUF sites when, in reality, other facilities would have worked.

In-depth analysis is both time-consuming and expensive. The practical effect is that designing an experiment becomes a one-shot affair, with little opportunity to go through the process repeatedly. Besides preventing iterative optimization of an experiment, in-depth analysis can lead to the lock-in of a design and NSUF target reactor.

With the RAD Calculator, users have the flexibility to rapidly change experimental design parameters, knowing that results of the RAD Calculator are a fairly accurate representation of the eventual real-world outcome. Users can access the RAD Calculator by logging into their NSUF account and selecting Resources, then RAD Calculator, from the left navigation menu. Alternately, users can get there directly by going to nsuf-infrastructure.inl.gov/Calculator.

When operating the RAD Calculator, users must first decide if they want to (a) specify an irradiation time or (b) set a damage goal in dpa. After entering this choice in the calculator, users then must enter the material composition of the experimental sample. The material formulation for the RAD Calculator is the same as is used elsewhere on the NSUF website, so the material composition can be a simple cut and paste of already available information. 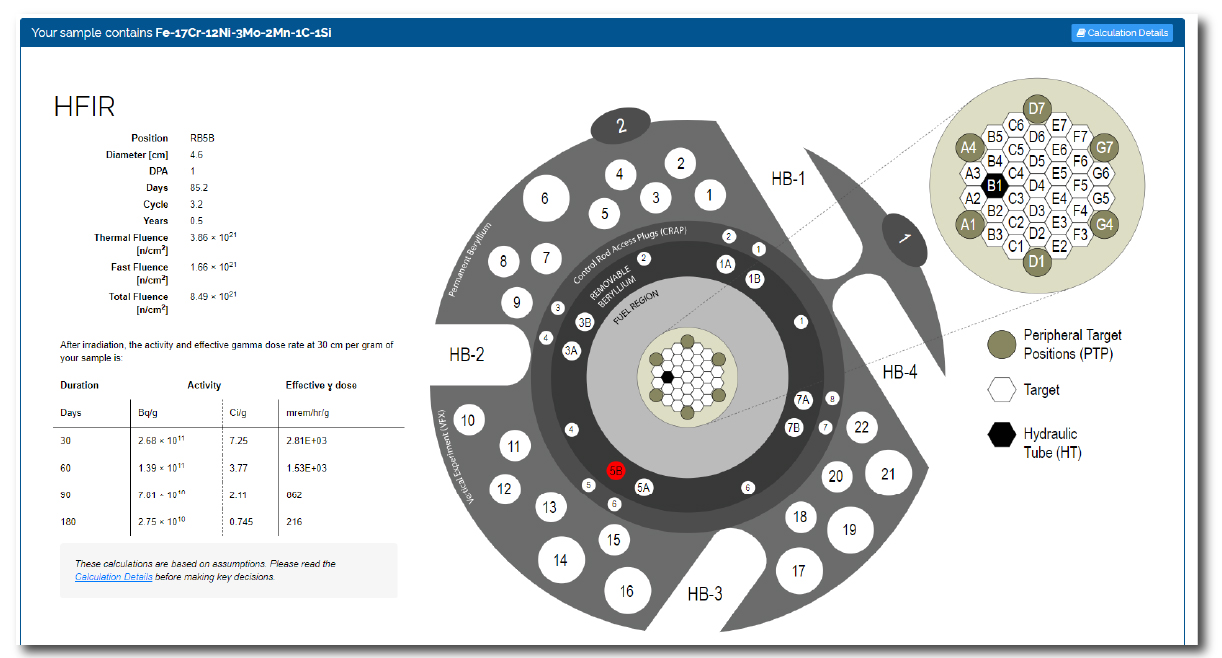 Users are then presented with a screen that shows data for many possible experiment locations at NSUF reactors. The RAD Calculator displays how much radiation damage there is in a set time if choice (a) was made initially. If option (b) was selected instead, then the amount of time needed to achieve desired radiation damage is displayed.

When the user selects a reactor position, the RAD Calculator estimates how radioactive the material will be as a result of the experiment. This information can help guide decisions about how, when, and where to do the post irradiation evaluation of the material. Samples may, for example, be handled in hot cells that are able to deal with high levels of radioactivity, or users may opt to let samples rest, and in so doing, decrease in radioactivity.

This quick overview shows how the calculator works today. Planned enhancements will improve the RAD Calculator’s usefulness over time.

Continuing work aims to increase the accuracy of the activation results and the assessment of radiation damage caused by activation products. In addition to such behind-the-scenes upgrades, improvements in the user interface are underway.

Long-term plans include additional features such as the ability to handle nuclear fuel specimens, the addition of a nuclear heating estimate and full integration of the RAD Calculator into the Nuclear Fuels and Materials Library. Armed with this information, users could then have an idea how radioactive samples would be in the future after an experiment.

The RAD Calculator is the first component in what will eventually be an entire “technical lead in a box” toolkit. These tools can help maximize the usage of all NSUF reactors and sites. For users, this technology will mean greater efficiency in developing experimental designs – a welcome result of having a better tool for a job.